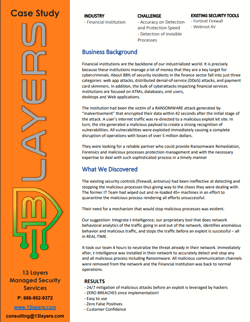 Financial institutions are the backbone of our industrialized world. It is precisely because these institutions manage a lot of money that they are a key target for cybercriminals. About 88% of security incidents in the finance sector fall into just three categories: web app attacks, distributed denial-of-service (DDoS) attacks, and payment card skimmers. In addition, the bulk of cyberattacks impacting financial services institutions are focused on ATMs, databases, end users,
desktops and Web applications.
The institution had been the victim of a RANSOMWARE attack generated by “malvertisement” that encrypted their data within 42 seconds after the initial stage of the attack. A user’s internet traffic was re-directed to a malicious exploit kit site. In turn, the site generated a malicious payload to create a strong recognition of vulnerabilities. All vulnerabilities were exploited immediately causing a complete disruption of operations with losses of over 5 million dollars.

Find us on social media